Hey guys! After a long pause I want to show you how I make a Mother's Day Cake inspired by -> Man About Cake with recipes from Craftsy.
Because I live in europe and I didn't want to make such a big cake for my mum, my granny and me, I had to change the recipes a little. This is how I prepared it!

1. Vanilla Cheesecake (-> original recipe)
These are the ingediences (I forgot the vanilla extract, but luckily I always use sugar with vanilla). I also realized I devided the original recipe wrong, so on the photo you see 1/4 of the original amounts of each ingedience. Here is what I used for one ? cake. 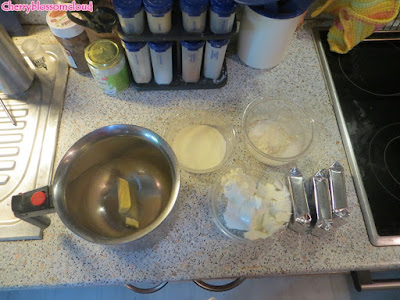 Then I prepared the pan with paper (Backpapier) on the ground, a thick coat of butter on the sides and I folded two layers of aluminum foil around it (one layer vertically, one horizontally). 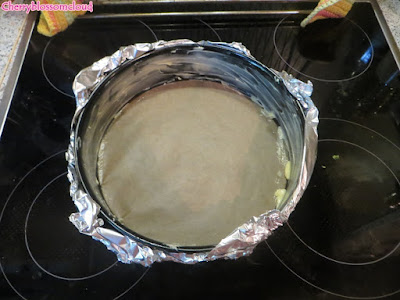 Then I melted the butter (sry, forgot to take a picture) and put the Oreos one half at a time into a plastik bag (Gefrierbeutel) and secured it for smashing the cookies (mit einem Nudelholz). 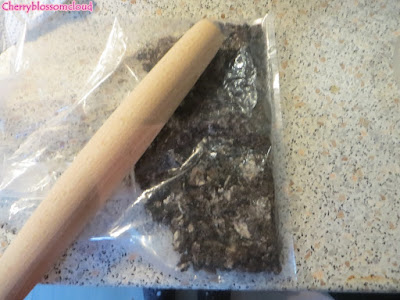 Then I poored the melted butter over the smashed cookies which are in a bowl and mixed it with a fork. 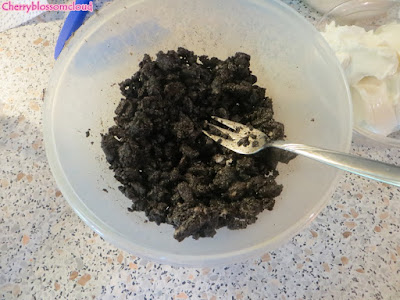 When you put the mass in the pan as the ground for the cake, make sure that the entire bottom of the pan is covered and the mass reaches to the sides, then gently press the cookies down with the fork to put the mass together. 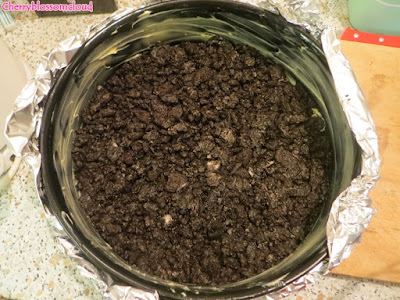 Next, I stired the cream cheese until it was smooth. 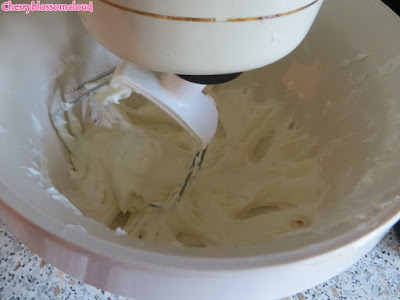 Then I added the flour, sugar and cream (usually also the vanilla extract) and mixed. 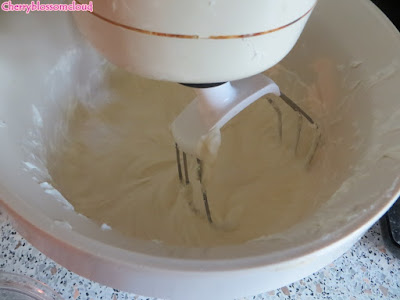 On low speed, I added one egg at a time and mixed until all has become a nice flat mass. 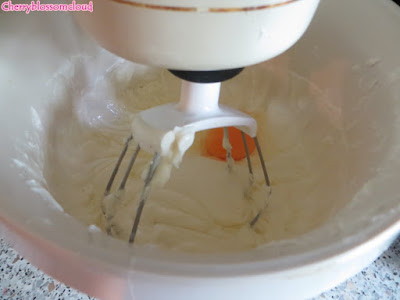 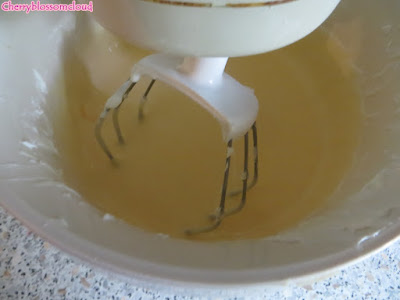 Lastly, I filled the mass in the pan (unfortunately, there were lasting bits of cream cheese at the bottom of the bowl, but they would be baked into the mass). Then I filled hot water onto a deep baking tray in the oven at 150°C for 15mins. After that, I refilled the water and reduced the temperature to 100°C to bake the cake for 1h. 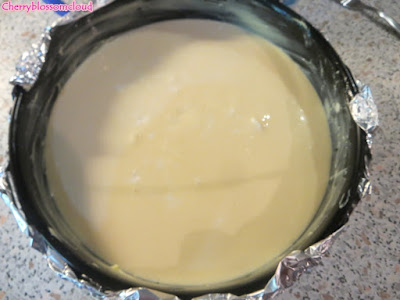 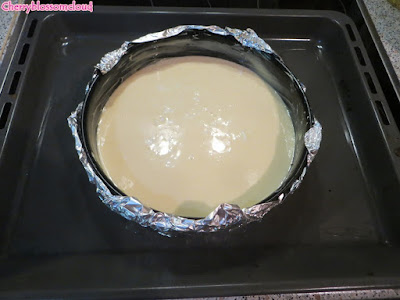 After all this mess I needed to wash all the bowls and stuff... 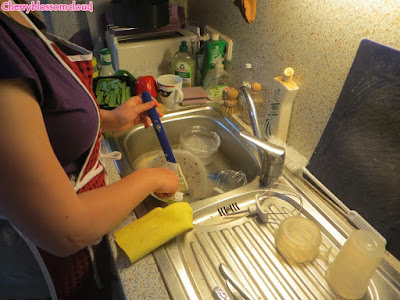 When the cake is done, remove the aluminum foil and let it cool at room temperature. When it's cooled, put it in the fridge over night. 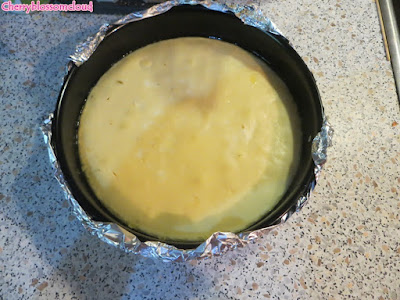 2. Vegan chocolate cake (-> original recipe)
So again I only used parts of the original amounts just to cover a ? pan. Still it was a little too much dough, so I also made three cupcakes...
Nonetheless, here is what I used:
On the photo I already mixed cocoa with sugar and flour with baking soda and salt. 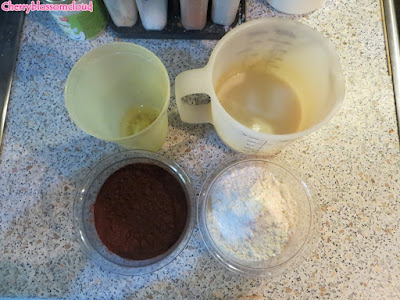 I poured all dry ingrediences in a bowl and mixed them. 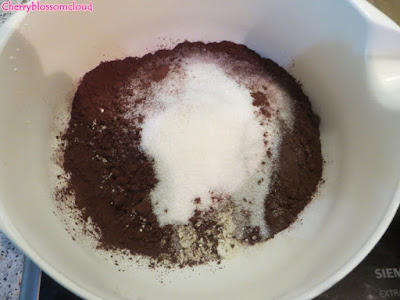 Then I added the vanilla to the oil and this mixture to the dough. 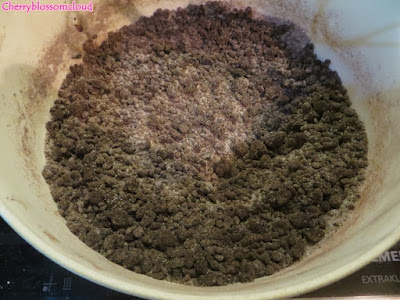 Lastly, I added the milk and mixed until it was a smooth mass. 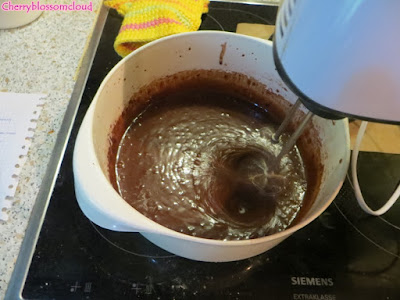 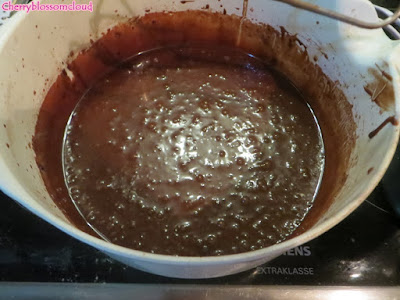 Then I filled the pan and let it bake for 30 mins at 175°C to check if it's done. If not (dough sticks to a stick that has been stuck in the middle of the cake), bake another 15mins. 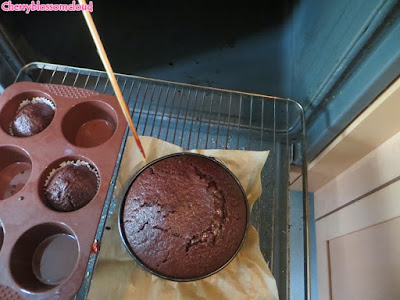 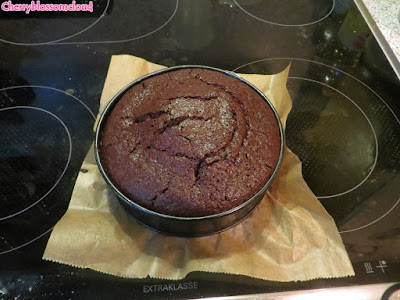 3. prepare the butter for the browned butter cream cheese frosting (-> original recipe)
To make the frosting tomorrow, I needed to melt 170g butter over high heat and cook it until it forms medium-brown flecks (should take about 5-10mins). Then I poured it into a bowl, covered and left it overnight at room temperature to cool.

Tomorrow I will show you how I put the cake together with frosting and decoration!
at 05:18

Email ThisBlogThis!Share to TwitterShare to FacebookShare to Pinterest
Labels: baking